Jesica Garrou is the Associate Producer of Surviving the Rosenthals.  She approaches her work in a collaborative and supportive manner.  “I am a collaborator. My creativity comes via helping others create what they want to achieve.”  She feels a strong sense of responsibility to protect the visions of the production.  “As the associate producer, this means I get to ensure both the writer, Arnie and the Director, Andrea’s visions are met and that everyone involved contributes to the creative process that creates the final product.”

SURVIVING THE ROSENTHALS introduces us to songwriter Sammy, who enters therapy to heal himself and break free of the childhood shackles, brought on by his overbearing father, that still stifle him as an adult. The musical takes a surreal twist as Sammy meets – Sammy! Adult Sam meets 10-year-old Sammy in a battle to save himself. Surviving the Rosenthals provides real-world hope and outcomes … and does it in 90 minutes … set to music!

I had a chance to chat with Ms. Garrou to gain further insight into her career and her involvement with this production.

What drew you to this project?

I have admired Andrea’s work for a couple of years. She sent me the script and the music and I knew I needed to be a part of it in some way. The script is strong, modern, and poignant. The music is catchy and interesting to perform. I knew it was going to do well at this festival but also beyond and I wanted to be part of the team that makes it happen.

What is your creative process?

I listen and ask questions. I listen with my heart as well as my ears. I want to ensure everyone has a space to be a part of the project and to shape the piece.

Do you find a sense of added responsibility when dealing with plays that tackle serious, mature, or timely subject matter?

This piece deals with very heavy topics. In my role, my responsibility is to ensure the actors, the crew and everyone involved is comfortable even as the content brings up personal issues. I call it the “brave space”: a place where people feel safe but also bold enough to try and take risks. It is also the responsibility of our entire production to continue that brave space to the audience: a space where the audience feels safe to watch but bold enough to explore new ideas.

This is my first NYC show and I am honored to see how the NY theatre scene works in contrast to the New England regional theatres I have worked with since childhood.

Hmm… My answer to this is not relevant to this show. But I think theatre should be accessible beyond the metropolitan areas. So while I did not experience a lot of great “zoom theatre” over this pandemic, I do think there is a way streaming media can bring theatre and theatrical opportunities to a great public. One thing that has changed is the cost of everything. When it comes to salaries, I believe this is a good thing as art is valuable. When it was taken away, the world felt it. Audiences missed theatre and live music. We missed art museums and galleries. We felt the difference of a world with limited access to creative output and I am hoping that means we will come out of this putting value on how creative endeavors impact our lives and create sustainable incomes for those who participate.

What’s next for you?

In addition to this piece, I am the production stage manager for Fire Island the musical which plays as part of The New Works Festival at Theatre Row. After that, I will return to Maine to spend a few weeks with my family and back to helping playwrights develop their work via zoom. I am always ready for the next adventure wherever it takes me.

“I’ve had the entertainment bug since I was very young, singing and dance lessons lead to school shows and eventually an acting major at Emerson College. I took everything I could as an extracurricular – makeup EFX and mask making, stage combat, set and stagecraft, playwriting and dramaturgy. As soon as I graduated, I began getting offers to ASM on festival gigs I had been cast in as an actor as well. Stage managing across indie theatres in NYC and Brooklyn lead me to circus arts, drag, burlesque and the avant-garde, performance art in non-traditional spaces, storytelling and community building,” said theatre professional, Sara Minisquero in her customary one-breath.

Sara is a power-player in a rapidly growing group of artists whose diverse acumen make them valuable on ALL levels of the arts. Sara has acted, directed, produced, managed, designed, tech’d on all levels, onstage and television and in film. She recently received kudos as the only woman in Jed Ryan’s cinema send up of the male mode: Modest Male Exposure, premiering at the gene Frankel Theatre late April.

As the world opens-up – not only from Covid but from its veiled prejudicial and becomes more inclusive to all styles and peoples – artist like Sara will be more than valuable, they will be demanded.

The “triple threat” is becoming the omni-artist.

BTSSS spoke with sara backstage of her latest work, Joe Moe’s exploration of a “closeted” form of toxic masculinity, the play, DENY WE WERE.

We laud the actors and directors but those that manage the production are just as important. Tell us why?

We know what happens when you just take a script, some actors, and a director… and it’s called a reading. Yes, audiences can enjoy a reading, but it’s not the same immersive experience you get when a designer considers the era, the clothes, the objects and utensils of the setting that are pivotal in aiding the audience with not just the understanding but the sensations of the world of the play. Mundane or exotic, the full theatrical is a transformative, sacred rite- everyone involved is woven into these moments. Your production management keeps every collaborator in the loop, on course, and well supported through a process that is long but never long enough and incredibly taxing both emotionally and physically.

Tell us a time when you knew you made a difference in the success of a production.

My tried and true champion tale of earning my SM battle stripes came upon a Coney Island production called “The Education of Al Capone (As if Told by Jimmy Durante)”. We had a small cast for a two act original musical featuring the aforementioned famous names plus a few others detailing the exciting life and times of the notorious hometown gangster. As is the nature of the business, we lost our male ensemble member during one night of our run to a miscommunication (or lack thereof) from his manager about being on a film set the entire day. What happened? I got slapped into drag, covered his entire track, still ran fight call and music call (both of which, I had to be folded into rather quickly), wrangled and safety tested our prop guns, AND made practical pasta on stage to serve to the audience for a food fight in act 1. Why would I push myself like this? Because when given the option to cancel the show, the rest of the cast had complete faith that I could do it, and that this audience would enjoy it. I will never forget that day because it finally felt like my choices and my direction in life and my career wasn’t random but entirely what it needed to be to bring me to that very moment.

Play- and Screenwriter, Joe Moe, premieres a new work about an often
obscured section of the LGBTQ community in
DENY WE WERE
Premiering as part of the Fresh Fruit “Return to Live Theatre” Festival 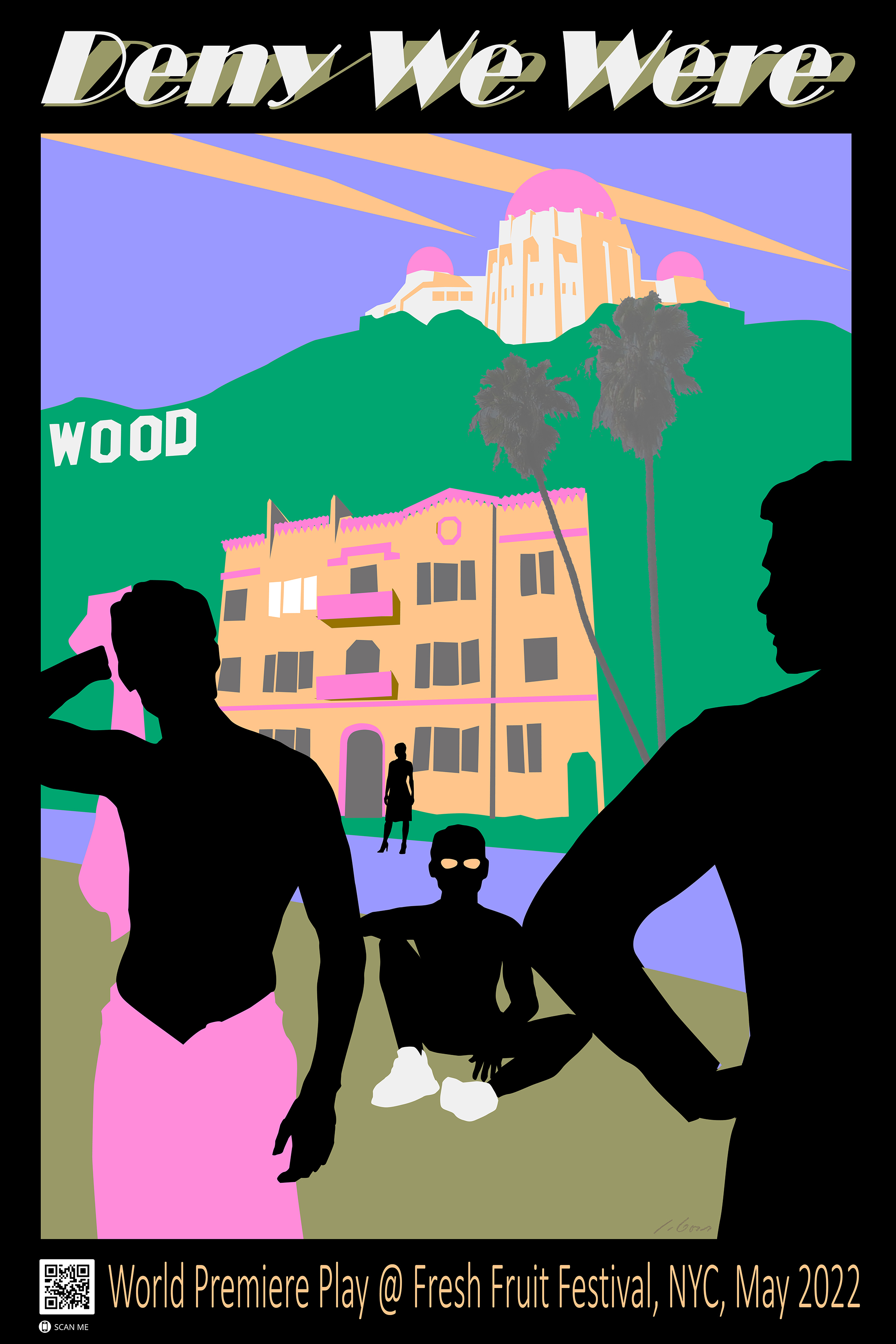 It’s all LA sunshine and fun until a handsome teenage inquisitor shows up with a chip on his shoulder. When precocious 17-year old Jonah McCabe bunks with adopted “Guncle” Dean Vela, raging hormones take a backseat to burning resentment of his controlling, ex-model dad, Jimmy, and a sneaking suspicion Uncle Dean and dad have been “more than just friends.” Dean deflects. Jonah’s mom, Carrie, vents her issues with partner Jimmy, who she supports financially and who, in return, enjoys it. Who is this gorgeous villain that has everyone eating off of his abs? When Jimmy finally appears in the charismatic flesh, thirsty secrets unravel in the narcissistic centrifuge that spins around an unsqueezable love-sponge. Desire and deceit, all suspended in a soap bubble of wicked humor.